Jade's mother Rose was briefly married to Alan Scott, but fled upon conceiving their children, fearing she would harm them. She gave them up for adoption and they were separated. Jennie-Lynn was adopted by a couple in the Milwaukee suburbs. Jennie did not learn she had a twin brother until she was in her late teens. Shortly after she and Todd met, surmising they were the children of Alan Scott, they attempted to join the Justice Society. They were rejected, but joined with other children and protégés of JSA members to form Infinity, Inc..

Due to her father's exposure to magical energies, she and her brother were born with metahuman powers, although Jade's only manifested themselves when she was defending herself from being sexually assaulted as a child. Jade's powers greatly resemble those of the Green Lantern Corps: she is able to generate green energy and shape it into constructs according to her will. She once lost those powers when she fought the Starheart, the source of her powers, but they were restored by Kyle Rayner during his first, short tenure as the god-like Ion. She later discovered that she had her mother's plant manipulation powers, when she caused roses to attack a mugger. While on a date with Kyle on an alien world, she told him that her skin actually contains chlorophyll (the source of its green hue), and she can photosynthesize sunlight like a plant. While she was without her powers, Kyle gave her a power ring and she briefly served as Earth's Green Lantern.

While she was in a relationship with Kyle Rayner, Jade met Access, a powerful dimensional hopping superhero. He simply appeared in the middle of her apartment, talked with her for a bit and left. Access has the power to cross over between the DC comics universe and the Marvel universe and had done so in many limited series specials. Access' appearance was notable in that it happened in a mainstream, monthly series.

Her internalized powers function much like those of her father, as she can create hard-light objects out of green energy emitted from the star-mark on her palm, and fly. She shares his weakness to wood and cellulose, but has no need to periodically recharge her powers.

When Kyle Rayner left Earth after the violent beating of his friend Terry Berg, Jade opted to come along with him; however, after several missions, Jade decided that she wanted to go back to Earth. Once back she became involved with another man and ended her relationship with Kyle (in that order). She recently served as a member and eventual leader of the new Outsiders. In Infinite Crisis, Donna Troy led a group of Earth's heroes, including Jade, into space, where they dealt with a growing rift in space. The Green Lantern Corps, represented by Kyle Rayner and Kilowog, also responded to this threat.

In the Rann-Thanagar War Infinite Crisis Special, Jen dies trying to stop Alexander Luthor, Jr. from tearing the universe into a Multiverse. Her consciousness lingers in her power, at least until her inherited Starheart powers merged with Kyle. This transfer instigates Kyle's second metamorphosis into Ion.

One year after the Infinite Crisis, while Alan Scott was in a comatose state during an attack by the Gentleman Ghost, Jade appeared to him. She told her father goodbye and granted him another portion of her green energy, replacing his missing eye (which he had lost due to complications while returning from space after the Crisis was over) with a green glowing orb that, due to its mystical origins and connection to Jade, allows him to track astral and mystical energy forms such as ghosts.

A Black Lantern Ring goes to Jade's grave to resurrect her and induct her into the Black Lantern Corps. Jade appears on Oa to confront her former lover Kyle Rayner. She claims to have been resurrected because of Kyle's love and tells him they can be together again, however Kyle is aware that she a Black Lantern and not the true Jade. He attacks her in rage nearly destroying Jade's body. She replies that if Kyle "won't return her love then maybe he will fear her instead". She captures him in a black construct, then proceeds to attack him with black contrusts of Kyle's former girlfriends Alex DeWitt, Donna Troy, and herself, along with Kyle's mother Moira Rayner reminding him of his past failures. Jade and Kyle's battle is interrupted by the arrival of Soranik Natu. Jade and Soranik fight (physically and verbally), with Jade making several rude comments. Eventually, Soranik just punches Jade in the mouth and activates her ring. At that moment, the Black Lantern's rings registered that their power levels had reached one hundred percent. As such, the Black Lanterns were given a new directive: to devour Oa's Central Power Battery. Completely disregarding her opponents, Jade flew off to her objective, with Soranik's hand still in her mouth. However, Kyle was able to separate them by blowing off Jade's head. Jade is later resurrected and restored to her full living self along with seven other former Black Lanterns by the Entity.

Jade converses with Soranik while she was testing her power level. She gave Soranik and Kyle's relationship her blessing. 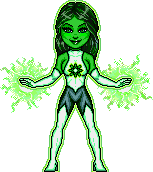 Add a photo to this gallery
Retrieved from "https://dc-microheroes.fandom.com/wiki/Jade_(Jennifer-Lynn_Hayden)?oldid=80056"
Community content is available under CC-BY-SA unless otherwise noted.